What Amazon & Airbnb Can Teach Us About Enrollment 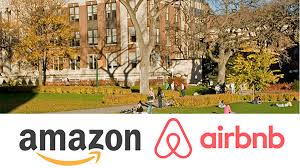 Can we all agree that Amazon and Airbnb are disruptive companies in mature industries? Can we also agree that they have both radically transformed their respective spaces, undercutting their competition by creating a whole new customer experience at better prices? And, of course, you could fill a dozen PowerPoints with all the reasons why they’ve succeeded so well. But, bottom line, unlike their competition, they never adopted a “Me Too” mentality. They never accepted traditional practices or tried and proven recipes. Instead, they set out to alter the business landscape.

And what does this have to do with your enrollment success? In a word. Everything. In fact, I’ll go so far as to say that everything you need to impact your school’s enrollment can be found in the business practices of both Amazon and Airbnb. All you need to do is heed their lessons and then adapt for your school.

Let’s reverse engineer their success and inspect exactly how they used disruptive practices to outmaneuver competitors and win over new customers.

The Five Lessons of All Disrupters

It doesn’t take too many clicks on your iPhone before you can find an apartment in France, or have your favorite tea overnighted to you by Amazon. This doesn’t happen by accident. Both Airbnb and Amazon have spent copious amounts of time, energy and money to perfect technologies that make using their services more efficient and easier than what their competitors were offering. And like all true disrupters, they are continuously working to streamline these processes even more.

How about you? Is your school using technology to make your student’s life easier? The application experience more transparent and effective? Technology should do more than track and process paperwork. Technology should make you a disrupter that allows your students to access the information that will help them take the next step in the fastest and most efficient way possible.

Yesterday, my wife ordered paper towels. You know how she did it? She yelled, “Alexa, order paper towels.” 24 hours later, they were at my doorstep. Talk about cut–throat disruptors. Every day, Amazon is making it easier to deliver immediate responses, and if you don’t believe me, check out that drone flying over your house. Yes, price matters, but all things being equal, speed and convenience will win over every time, especially in our instant-access society.

We all know that enrollment is a slow process. But, responding to customers’ needs wherever they are in the decision-making process must be immediate. And it can be done. Schools just need to find the right systems and tools for the job. One higher-ed disruptor doing just that is Southern New Hampshire University. In fact, we’ll call them CRM wiz-kids. Based on a recent mystery shop conducted by EducationConnex, they epitomize an organization that provides rapid response. Within minutes of our submission, they responded by phone and email, then continued to reach out twice daily for three weeks. No other school surveyed was as fast or persistent. They value inquiries and provide a first-class engagement strategy. And it’s clearly working. Based on a recent research and report by Babson Survey Research Group and e-Literate, and WCET, Southern New Hampshire University climbed from position 50 in 2012 to 4 in 2015.

When was the last time you looked for a faster approach to your services? A new way to brand your enrollment process? For that matter, when was the last time you even measured your response time? The takeaway is simple: an immediate and rapid response that is both authentic and helpful is the most powerful and effective disrupter available to higher education today. It’s simply not being used to its greatest advantage.

3. Disrupters cherish all customers regardless of size or geography.

The popularity of the Airbnb model is such that it is now the world’s largest hospitality company, operating in over 190 countries and with a market value of $26 billion at the start of 2016. The Airbnb concept is disrupting the traditional hospitality model, as tourists choose to live with the locals instead of staying in hotels.

While the overall concept is the obvious disrupting innovation, the founders of Airbnb believe that their real success is driven by meaningful interaction and trust with the hosts who share their homes and apartments. The company dedicates themselves to embracing openness and inclusivity with all hosts. In short, Airbnb views hosts as not simply customers, but as business partners, and they believe the more they take care of them, the more successful the company will become.

This is an intangible but important lesson for universities today, especially as enrollment departments are driven by bottom line numbers, whether spoken or unspoken. And, again, there is clearly nothing new or disruptive about what we could simply classify as old-fashioned customer service. But, like the previous lessons, the true disruption comes in how we implement this thinking into our day-to-day enrollment practices; how we find ways to do things different than our competitors. It’s an important distinction that will determine enrollment success. How much thought do you put into enhancing the human element, and finding new opportunities to turn yourself into a true partner with your students?

You don’t need a calculator to tally up all the billions of dollars Amazon is bringing in every year. By any metric; they’re killing it. And it’s easy to look at them with awe and say how did they do it? And, of course, you could be cynical and say they were in the right place at the right time. You could even say the industry was ripe for change at a time when the internet’s potential was clearly starting to boom.

But, that doesn’t explain how they have remained the leader in their industry. To remain a disrupter requires something more than timing and a good business plan. It requires a continuous commitment to investing in growth. Amazon wasn’t afraid to take a few risks and stretch their capabilities. They started out in the book business, but then kept investing in growth until they were selling everything from razors to pencils to groceries, truly becoming the premier “buy anything” store on the internet, with unparalleled customer loyalty. And with Amazon Prime and Amazon Studios, they’re now getting into the production game. In fact, they’re even taking on Uber with its new on-demand delivery service.

Understandably, the typical university can’t expand in any direction it wants. But, it can grow in all kinds of different ways, starting with the enrollment department. Let’s look at our friends at Southern New Hampshire University again. In addition to investing in their technology, they invested time and money in expanding their customer service, which was clear in our internal research. Even more, they were brave enough to invest a huge amount of money with a nationwide TV campaign (one estimate was 21 million dollars). That’s a lot of money, but it paid off. They doubled in size. Add it all up, and you find a pattern that suggests a culture of growth.

Of course, every school will define growth in their own ways. But, by any definition, investing in growth comes down to finding the strength to put something on the line for greater rewards later. It’s a willingness to expand, not just in size, but in services, programs, and processes. It’s the willingness to ask yourself one question: where can we grow our enrollment department? Where can we get bigger, better, faster, and more efficient? Answer these questions, and you’ll find your own pathway to growth.

It is impossible to create a product or service that will disrupt an industry without bold leadership. The two go hand-in-hand. What Airbnb and Amazon have in common are leaders who aren’t afraid to zig while the rest of the industry is zagging. They’re not afraid to embrace change and try new approaches.

SNHU’s President, Paul LeBlanc, is clearly bold. Not only is he not afraid to spend time and money on growth, but he’s also not afraid to act on his principles, even when faced with criticism and doubt. When he launched his successful marketing campaign, it was suggested by Slate.com that SNHU was acting like the for-profit University of Phoenix. LeBlanc responded calmly by saying, “Comparing anyone to Phoenix is automatically an insult to most (fair or not to Phoenix) and what we actually said is that we borrowed the best of operational practices from the for-profits (customer service, data analytics, a sense of urgency and accountability) while eschewing the practices that cast them in such a poor light.”

LeBlanc knew what was best for his university and wasn’t afraid to follow through with it, regardless of the skeptics. It is bold leadership from a school that has consistently shown how to use the power of disruption to separate itself from its competitors.

Fortunately, that same potential for power exists in every enrollment department who actively seeks out ways to disrupt the status quo by improving the quality of services to its students, while creating meaningful growth for its university.

Now, what do you say…go out there and disrupt your own world.

Your students will thank you for it.

Greg Swinhart is Senior Vice President of EducationConnex, a company dedicated to increasing total enrollment for universities and colleges through effective, affordable and student-focused solutions. For more information, visit www.educationconnex.com, or you can contact Greg gswinhart@educationconnex.com or call us 877-434-1828.